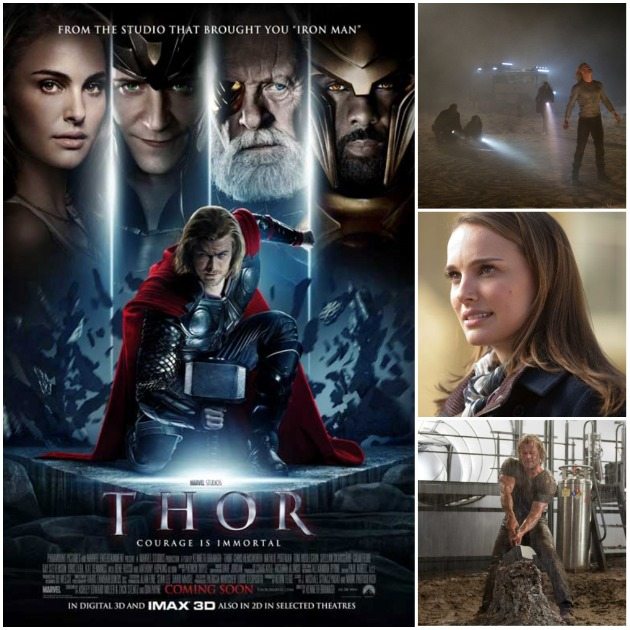 The plot.
Thor is the son of Odin who is the king of Asgard, (It helps to know your Norse mythology). Thor also has a brother Loki who is somewhat jealous at Thor. A long time ago there was a fight between the frost giants and the gods of Asgard. King Odin who was leading the gods won and recovered the frost giants “power” and hid it in the castle in Asgard. To get to Asgard you have to get across the rainbow bridge which connects Asgard to the other realms. Fast forward a bit and the day has come for Odin to pass the throne to one of his sons, Thor. On that given day the frost giants attack and the ceremony is put on hold. Thor gets so upset that he decides to go against his fathers orders, to never enter the frost giants realm, to fight and find out how the frost giants got into the castle. When Odin discovers what Thor has done he banishes him and sends him to another realm, Earth.

My opinion.
I absolutely LOVED this movie! Truth is I have a thing for fantasy movies and that this is a Marvel movie made it so much better. I’m not that into the whole comic book world, but maybe I should be? Cause this movie has drawn me closer to it! As written above I saw this movie in 3D which I most certainly can recommend! The creators made Asgard look divine and the rainbow bridge looks amazing in 3D, well everything did! When I went to see it I didn’t actually know Anthony Hopkins was in it, I just wanted to see it cause of the Norse mythology, (I grew up with stories about that). So there I was sitting in the theater thinking to myself;  “wait.. ain’t that Hannibal Lector’s eyes? OMG its Mr. Hopkins“. The actors were absolutely amazing and also, I did not know Chris Hemsworth till’ this movie and ladies… I’ve got to say that he is FIERCE in this movie. Major movie crush on him, hahaha! Also, I really liked the transformation of Thor, the way the character changes through out the movie that is. The surprise element in this movie could be classified as good or bad. It comes down to whether or not you know about the mythology. If you do, then no you won’t be surprised cause you know how the story goes but if you don’t I would say you would be. None the less I don’t have anything bad to say about this movie or well… I guess I could mention the fact that they chose to use a black actor for a role of a god that is infact white. But, that’s minor details! And I didn’t really mind that at all, cause I think he played the role perfectly 🙂

Watch if if…
You like the other Marvel movies such as “Spiderman“, “Ironman“, “The Fantastic Four“, etc. Or else just watch it if you want a good and entertaining couple of hours. You get to laugh, gasp, and admire the beautiful work of the creators (at least in 3D) PLUS you get to look at Natalie Portman and Chris Hemsworth. That should be enough in itself! 😛 I think most guys will like this movie cause it is filled with action and I mean come on… It’s Marvel! However I’m not sure all girls would appreciate this movie cause of the same reason but not to worry there is romance as well, not as much as some girls would like, but it’s there! And when you do go to watch it REMEMBER to stay and watch the little clip that comes after the credits!