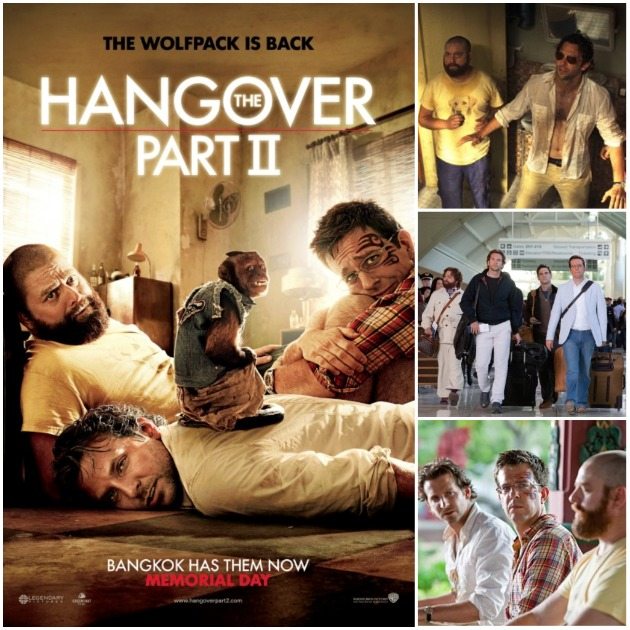 Plot.
We are now gathered again to a wedding but this time it’s Stu who is getting married. He is marrying a girl who is from Thailand and her parents really want her to get married in Thailand so all of Stu’s family and friends are going there to celebrate the wedding. Stu doesn’t want a bachelor party and hosts a bachelor brunch before they travel to Thailand. But things doesn’t really turn out the way Stu had planned and this time around they wake up extremely hungover in Thailand and this time the bride’s brother is missing, but where did he disappear to?

My opinion.
I think it was really funny and entertaining. I could definitely watch it again just as I could watch The Hangover again. They are both fun movies and this movie is perfect for a night with your friends cause you will all be laughing. I don’t know if I think this is better than the first one, I don’t think it is but they are so similar that it doesn’t make that much of a difference which you see first either. Of course you wouldn’t know the characters as well if you watched this one first, but if you haven’t seen the first one you can still watch this one because it’s an entire new adventure. Now that I think about it the first one was a tad better because we hadn’t seen a “hangover” movie yet and there were many surprise elements in it and now… Now we know that we have to expect crazy things, even though they did actually manage to shock me in one scene involving a Thai stripper, (it was hilarious). And my GOD I don’t hope I’ll be as hungover as them after my bachelorette party (whenever that will happen).
So yeah in other words it was kinda brilliant, again!

Watch it if…
You liked The Hangover or Due date, the humor is fairly the same like those movies. So if you liked those you should definitely watch it. If you expect to see something completely brand new and shocking you shouldn’t watch it (solely for this) cause it is very similar to The Hangover, it basically has the same plot just with small changes but it’s still really funny and worth watching, at least I laughed a lot!