It has literally taken me ages to find a new phone that would suit me and I’ve been looking at a million different phone company’s websites. Today I went to one of the company’s store to hold the phones in my hand and try the different ones out. My first choice was ‘HTC Wildfire’ my friend spitty has just gotten that phone and he told me it was cool plus that phone was the cheapest to get at the moment. But when I tried it out it felt so wide in my hand and I didn’t really like the design that much. I also tried the Iphones and such but they are quite expensive and I’m not going to be using the internet and apps that much and I think for a ‘starter’ smart phone it might as well be a cheaper one!

But as I didn’t want the Wildfire as I had first planned I had to find another. And when I got to play around with the LG GT540 also known as ‘Optimus’  (yeah lol I know just like transformers *facepalm*) I knew I’d found the right phone :]  I chose the Pearl White edition cause well the black is too boring and the pink is way too girly for my taste! It should be ready soon for me to start using it : D One hour left of charging woooo!! It’s a really pretty phone and I prefer the design above the other one and it was the same price as well so i’m quite satisfied with that. 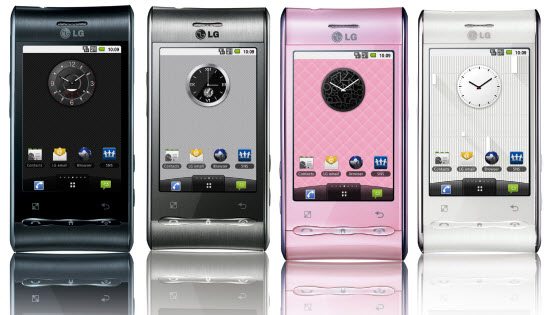